One voice: saying kaddish together

Saying kaddish with others is more comforting. This time around, I am "privileged" to be saying kaddish with a number of other mourners, men and women. At the shul (synagogue) where I go for the morning minyan (prayer service), there are--at present--four men saying kaddish (one recently "dropped out," having completed his 11 months).

However, the comfort that comes from saying kaddish with others only works when people are reciting it together. Kaddish said at different speeds results in a cacophony of voices and leaves me feeling frustrated and unsatisfied.

To achieve a kaddish where multiple voices are in unison requires speaking and listening at the same time. You have to be not so self-absorbed that you disregard the kaddish of others. Also, you have to be considerate of those whose Hebrew--actually Aramaic--is not as good as yours. The only way that kaddish can be recited in unison is for everyone to go as slow as the slowest person. Going slow also helps to ensure that you are not just reciting in a rote way but rather thinking about the meaning of the words as well as your act of remembering and honoring the person for whom you are saying kaddish.

An interesting minhag (custom) has developed at one of the shuls where I pray. When kaddish is about to be recited, all the mourners gather in one space to say kaddish together. The physical proximity helps us to hear each other's voices and makes it is easier to recite kaddish in unison. It also lends a feeling that all of us are in it together, fellow travelers through the same journey of loss and remembrance.

The Chabad web site has an interesting article entitled "8 Tips for Smooth Kaddish Saying." It notes that "the main point of the exercise . . . is not to say the kaddish, but that everyone should answer. (The congregation responds to kaddish by saying Amen and also, at the appropriate point:

It's hard to answer ten geese all on different tracks. So getting everyone in sync is of key importance." The article suggests that the mourners line up together and say kaddish loud enough so that others who might be inclined to go faster will slow down. "Never be embarrassed," the article concludes, "that you're going too slow. It's a house of prayer, not a racetrack."

This custom of gathering together to say kaddish takes on an added dimension on the sabbath when the prayer service takes place in the main sanctuary. Hundred of people are present. The mourners make their way to the front of the sanctuary and stand next to where the shaliach tzibur (prayer leader) is. From this space, they recite kaddish together. I feel even more self-conscious than usual. Everyone there can see you and identify you as a mourner. There is no anonymity, no hiding out in the back. We are literally put on the spot with a sense of obligation, even pressure, to make our kaddishes audible and in sync.

In a way, this custom makes sense. For those brief moments of kaddish, the mourners literally take front and center stage. It also confirms their role within the prayer service, namely that in saying kaddish, they act as de facto prayer leaders.

On a recent Friday night, myself and the other mourners came to the front of the shul to say kaddish. Afterwards, one of the other mourners with whom I pray and recite kaddish every morning, shook my hand and nodded in approval. All of us had stayed on an even pace and in unison throughout all the kaddishes. Then he said to me two words that embodied the myriad of emotions he felt: "one voice."
on June 27, 2019 No comments:

Sfirat Ha'omer is of the most challenging mitzvot (commandments) to fulfill. Sefirat Ha'omer (sometimes just called Sefira) refers to the the counting of days between the holidays of Pesach (Passover) and Shavuot. The Torah instructs: "and you shall count from the day after the Sabbath, the day you have brought the Omer (barley offering) of the waving, seven full weeks. . . and you shall present a new meal-offering to the Lord." (Leviticus 23:15-16) וספרתם לכם ממחרת השבת מיום הביאכם את עמר התנופה שבע שבתות תמימת תהיינה: עד ממחרת השבת השביעת תספרו חמשים יום והקרבתם מנחה חדשה ליהוה  The rabbis interpreted the phrase "after the Sabbath" to refer to the day following the first day of Passover. Thus, on the second night of Passover, one begins counting the Omer, from one to forty-nine (seven weeks). The fiftieth day marks the holiday of Shavuot.

The counting is optimally done at night, since the new day in Judaism begins at night. A blessing is recited and then one enumerates the specific number of the day. When you reach the first week, you also recites the number of weeks as well as days. For instance, on the 43d day, one would recite the blessing and then say "today is the 43d day, which is one day and six weeks of the Omer."

The unusual part of Sefirat Ha'Omer is that it is considered as a unit with 49 component parts. In contrast, most, if not all, other commandments are considered one-offs, that is, their performance is considered complete after a single instance. For instance, you light Chanukah candles every night of the holiday, and each lighting is considered a separate event.

This understanding of Sefira is consequential as to whether one recites a blessing prior to the counting. If one forgot to count at night but then remembered during the next day, one continues to recite the blessing before counting the next night. But if one completely forgot to count, then one has not fulfilled the commandment, and, as a result, no longer recites the blessing prior to the counting. In contrast, if you forgot or were unable to light Chanukah candles on one of the eight nights, you would continue to say the blessings before you light on subsequent nights.

Thus, optimally fulfilling the commandment of Sefira--meaning you count with a blessing each day--requires you to remember to count 49 separate times. This leads to those who have forgotten to count saying colloquially "I'm out," meaning they are still counting, but not doing so with a blessing as a result of missing a day.

Precisely because it's not easy to fulfill the mitzva of Sefira, one feels pride and a sense of accomplishment in completing the counting. A number of aids have been developed to help people remember each night. An old fashioned, but still effective, way involves using a Sefira counter, a wooden box with a movable knob that one turns each day to the next number. 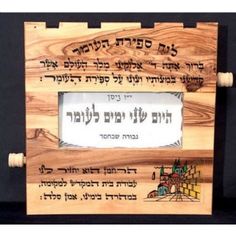 More recently, one can, as I have, sign up with Chabad or other organizations to receive a text alert each night. The messages below are reminders to count on the 9th and 10th days: 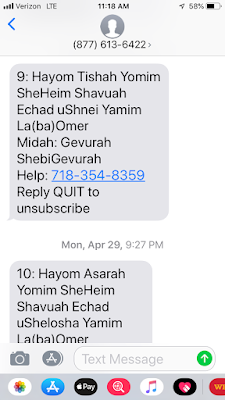 Perhaps the best way to be remember to count is to go to shul every evening. Counting Sefira is incorporated into the ma'ariv, or night, prayer. In shul, one person, usually the rabbi, will recite the day and then the congregation follows, each person reciting the formula to him or herself. The first time I was able to complete the counting was when I was saying kaddish for my mother and thus going to synagogue on a regular basis.

There is, however, one big catch to the text alert and synagogue methods of remembering to count, and that is the sabbath. You're not supposed to use your cell phones on the sabbath, which renders useless the text alert. As such, no text alert is sent on that day. Instead, you get an alert on Friday afternoon that says "set your own reminder for Shabbos (the sabbath)."

Moreover, Sefirat Ha'Omer takes place during the spring as the days are getting longer. Most Friday night services take place and end before sunset. (This is called bringing in the sabbath early.) Since Sefira can only be recited when the new day begins, there is no recitation when services end before sunset. My problem is that I got used to remembering to count by going to shul. By the fifth sabbath during the Omer period, as the days got longer, Sefira was no longer being recited. I had to remember to count after I got home from shul. I didn't.

Here's what exactly happened. I was got up to day 41. Day 42 was the sabbath. I got home. I began enjoying my friday night meal. By that time I was no longer thinking about Sefira. And since I became accustomed to reciting Sefirat Ha'omer in synagogue, I wasn't thinking about having to say it at home. On the evening of day 43, I remembered that I had forgotten to count. I was "out." And I didn't feel good about it.

Various people had given me some advice on how to remember to recite sefira on Friday night. Someone suggested putting an object or note on your pillow so that you are reminded to count when you go to bed. Someone else suggested putting your watch on the opposite wrist on Friday evening. Another suggestion was to put a post it on the table so that you will be reminded during the meal.

Of course, all of these have one problem: you have to remember to set the reminder. Needless to say, I didn't.

My forgetting had ramifications not only for myself. On night 44, I was, as usual, chosen to lead the evening prayers. Then I got up to the point where Sefirat Ha'Omer is recited. No rabbi or other synagogue official was present. In such a case, the prayer leader would ordinarily recite Sefira for the congregation. But I couldn't do it because, having lost count, I could not recite with a blessing. Of course, I didn't want to admit it, so I looked at one of the regular shul goers and indicated he should say it. He wasn't used to doing it for the congregation and ended up reciting the wrong number (the previous night). Someone had to correct him. That only made me feel worse that I'd messed up the counting.

My record for making it through all 49 days of Sefira is not good. But, as when your favorite sports team loses, there's always next year.

I have now twice travelled down the path of Jewish mourning. The first time was nearly eight years ago after my mother, Hilda Yael Kessler, ...