Sitting shiva is one of the most intense experiences, religious or otherwise, that I've experienced. The days, at the time, felt very long--the prayer services began at 6:45 a.m. and visiting hours ended at 9:30 p.m.--but, looking back, the week went quickly. It's been slightly more a week since I "got up" from sitting shiva, yet it feels as if it happened long ago. As intense as the experience is while undergoing it, it vanishes just as quickly.

I remember everyone who visited. I don't remember everything I or others said. Some conversations were just about catching up with old friends, others about recent or long ago recollections of my father. Some of the words spoken dissipated shortly afterwards, others were burned into my psyche.

One friend commented on the phrase with which visitors comfort mourners: "May God comfort you among the mourners of Zion and Jerusalem." (המקום ינחם אתכם בתוך שאר אבלי ציון וירושלים)
(See https://www.shiva.com/learning-center/visiting-shiva/what-to-say/comfort) 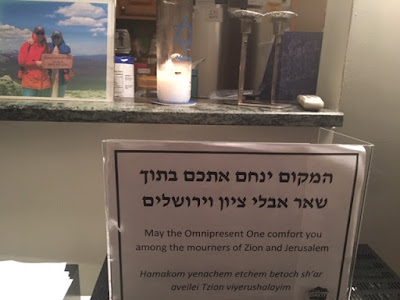 Except that it phrase doesn't use a usual word for God. Rather, it uses the odd formulation "The Place (המקום)." My friend suggested that "The Place" could refer not only to the God but also to the physical space one inhabits. This was quite fitting as I sat shiva in my father's "place," his apartment, which he furnished so beautifully from a lifetime of collecting art collecting with my mother, z'l. And so my friend suggested that my father's place could also serve as a source of comfort. Comfort can come not only from heaven, but from the world humans create as well.

I was speaking with another friend about my father's love of classical music. He grew up idolizing Arturo Toscanini, even giving my brother the middle name Arturo in his memory. He had a massive LP collection. Those thick black box sets formed part of the backdrop of my childhood. But during his last illness, he stopped listening to music. Whenever I suggested putting on some music, he shook his head no. I thought it would have soothed and comforted him. When I mentioned this to my friend, himself a musicologist, I remembered that my father sometimes made arm movements that seemed as if he were conducting. My friend said that meant that my father was listening to music: he no longer needed to hear it; he had internalized it. He took his music with him. A comforting thought.

I shared an image to another friend about what I felt like being parentless. I imagined a door opening into a dark, dimly lit, space. Someone was shoving me from my familiar world into that space. I would have to find my way in this new uncharted and unlit space. My friend suggested a very different metaphor of living without parents. She said that a parentless child is like a young tree in a forest which has lost the canopy of the trees above. A much more hopeful image. A young tree, even though less protected, continues to grow. One day that tree will provide the canopy to newer trees.  Protection is wanted, but not forever provided.

I will carry these thoughts of comfort during this year of mourning, and beyond.
on January 25, 2019

I have now twice travelled down the path of Jewish mourning. The first time was nearly eight years ago after my mother, Hilda Yael Kessler, ...